Mangafest Summer Edition In collaboration with Tokyo Missionwe prepare a draw through Twitter in which we are going to raffle 10 double tickets (2 tickets for each winner) to be able to attend the event that will be held in FIBES (Seville) on June 25 and 26.

📢 CONTEST! We are giving away 10 double tickets for the @Mangafest Summer Edition
To participate you must do the following:
– Follow @Mangafest and @Misiontokyo
– RT this tweet
– Name 1 friend with whom you will go to the event with the prize
Deadline: 05/15/2022 pic.twitter.com/rOzBiOqp3D

manga festthe Festival of Asian Culture and Digital Leisure of Seville, considered the largest entertainment event in Andalusia returns to Seville with the second summer edition, a ‘Summer Edition’ whose tickets are on sale and with discount until May 15.

Thus, in 2022 two editions of manga fest In sevilla. On the one hand, after the success of the first ‘Summer Edition’, the Seville Conference and Exhibition Center (Fibes) will host the second summer edition of the largest entertainment festival in Andalusia on the last weekend of June. On the other hand, December is the eleventh edition of Mangafest, which is celebrated on December 2, 3 and 4.

This year Mangafest ‘Summer Edition’ will receive more than 30 national and international guests, among which stand out, for example, the team of dubbing actors who give voice to Dragon Ball.

Also the Bulgarian actor Stanislav Ianevskywho played Viktor Krum in the film saga of Harry Potter along with other guests who will be revealed in the coming days on social networks and on the Mangafest website.

K-Pop, Cosplay and much more

Contests, exhibitions, workshops, exhibitions, etc. manga fest warm up engines and the ‘Summer Edition’ will feature hundreds of activities that will take place over the weekend.

Music made in Korea, K-Pop, will be one of the stars of the second summer edition. Fans of this movement
they will be able to participate in Gotta Dance, the contest in which they show all their talent, in addition, they will be able to enjoy performances, and
exhibits.

Another of the outstanding contests is the Mangafest Cosplay Awards, which each edition packs the auditorium where it is held at Fibes with more than a thousand spectators and thirty participants who are characterized as their favorite manga, anime, video game, series or movie characters. 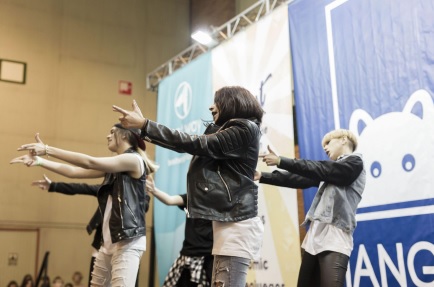 A festival for the whole family

Mangafest ‘Summer Edition’ has put its effort into devising activities that will delight the grown-ups and make the little ones fall in love with them. This edition will feature the participation of Isolandia and her fantasy kingdom inspired by princesses Disney. They will participate with magic sand workshops, slime, crafts, giant bubble workshops and many surprises.

For its part, Seville Wrestling He also signs up during the weekend to give a show at Mangafest. It is a spectacular sports association in charge of teaching, promoting, offering and offering wrestling shows throughout Andalusia.

Added to the proposal is a generous toy library, dynamic contests for all audiences and outdoor games such as softcombat and water activities to refresh the public. The geek meeting point of Andalusia

manga fest It will be once again the meeting point between guests and followers. They will be able to go to their shows, signatures, and get the answers to questions that they always wanted to ask them to know all their secrets.

The festival is also the ideal place for content creators, artists and artisans to share their art and showcase their creations. Special mention deserves in this edition the area of ​​tattoo artists, in addition to the space dedicated entirely to artists and numerous shops where you can buy geek products at the best price: figures, t-shirts, illustrations and much more.

Tickets on sale now and with a discount until May 15

Mangafest Summer Edition has its tickets on sale at mangafest.es with several options adapted to all audiences. Also, until May 15, with a discount.

On one side is the General Ticket, which gives access for one day, the 2-Day Ticket with which you can access Saturday and Sunday, and the Total Pass. The latter gives access to the two days of Mangafest ‘Summer Edition’ and the three of Mangafest 2022 (in December). Likewise, on this occasion, visitors can opt for the Combo Ticket, and add a Select Vision at his entrance to Mangafest. You can check all the details here about the tickets here.

For the second consecutive summer, manga, anime, Asian culture and digital entertainment will move to Mangafest at FIBES (Seville) on June 25 and 26.