The good thing about life is that, as it progresses, it makes us wiser. However, how many times we would have liked to know how to act in certain situations when we had not yet walked far enough. Hence the importance of good advice. This is how today’s gift starts: with 103, no less. Let’s start!

On his 70th birthday, the editor of Wired has wanted to give us a gift and offers us 103 pieces of advice that, in his own words, he would have liked to receive when he was young.

A great gift (thanks, Sacha).

Some say that this is the best shot ever shot with a drone.

It is a dizzying scene of extreme cycling in the streets of Cerro Abajo in Valparaíso shot in a single take, without cuts. The company responsible for the filming is called Dutch Drone Gods, which gives clues about its capabilities… and also about its arrogance.

If you want the full version where they explain how they prepared it, it lasts ten minutes, but if you prefer to see only the aforementioned sequence shot, start directly at minute eight and be amazed.

A new television format that comes hand in hand with the development of artificial intelligence.

France 3 has presented Hôtel du temps, a program in which famous people who have died are interviewed. I must say that I was concerned when I read the news because, since it was not a real interview, the memory of the person interviewed could be affected, and not necessarily for the better.

Here you can see the trailer of the first program, in which Dalida was interviewed; lasts 50 seconds.

In addition to the photographs, in the link you will find a video where you can also listen to the sound of this ephemeral work. 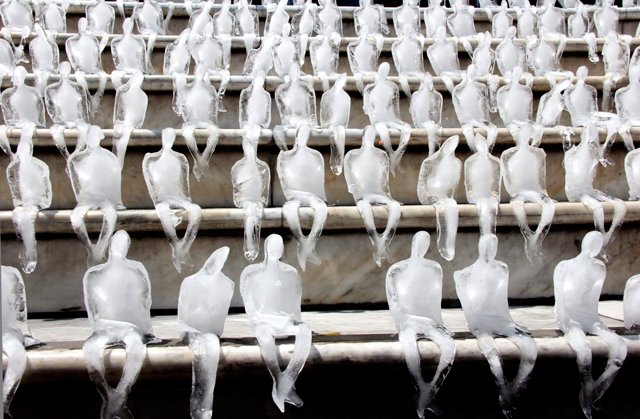 5.-Censorship is fought with ingenuity

The Governor of the State of Florida enacted a law expressly prohibiting students and teachers from speaking in schools about their sexual orientation.

The director of the academic center where Zandar Moricz was studying, knowing that he is a gay activist and that very possibly he would use his turn to speak at the graduation ceremony to claim his condition, reminded him of that law and threatened to cut off his sound of his microphone if he disobeyed.

That didn’t faze Zandar, who found a great metaphor for jumping over the law. That student’s witty speech lasts 1:40 (thank you, Albert)

6.-The wonderful show of the fireflies

Billions of fireflies inhabit a natural park set aside to protect the tiger in India.

I guess being there must be awesome.

The man who flies with the geese and teaches them the safest migration routes.

I flew with birds. You can too lasts 6 minutes.

8.-The Queen greets the Queen

This weekend the splendors and celebrations of Queen Elizabeth II’s jubilee reach their peak.

I guess those of you reading this from the UK must be a little tired of this commemoration, but I’m sure you’ll know how to excuse me for adding to the topic as well.

This is what God Save the Queen sounded like at Wembley in ’86.