Ixcanul Foundation is a initiative that seeks to educate through cinema in Guatemalato cause positive impact and social change, promote critical thinking, the professional development of new filmmakers, and generate demand for national and international productions. What a chili!

The foundation is made up of Alejandra Colom, Jayro Bustamante, Diane Bathen and José Sagastume and they seek to achieve social change.

Fundación Ixcanul, an initiative that seeks to educate through cinema in Guatemala

The Foundation considers cinema and audiovisual media as a social mirror and reflection tool and seek to promote the development of populations that have been historically made invisible and deprived of their rights. It also promotes high-quality technical and content standards on issues relevant to local and regional populations.

Description of the photo for people with visual disabilities: María Mercedes Coroy with a young woman. (Credits: Ixcanul Foundation)

Ixcanul girls: During the years 2016 and 2017, 50 forums were organized to present the film Ixcanul to high school students in different departments of Guatemala. Forums sought to address marriage
early and forced, adolescent sexuality and migration and its causes.

Roaming screen for recent history and historical memory recall: In coordination with groups and rural associations, projections of La Llorona were carried out accompanied by forums for
discussion, in five municipalities of Guatemala. 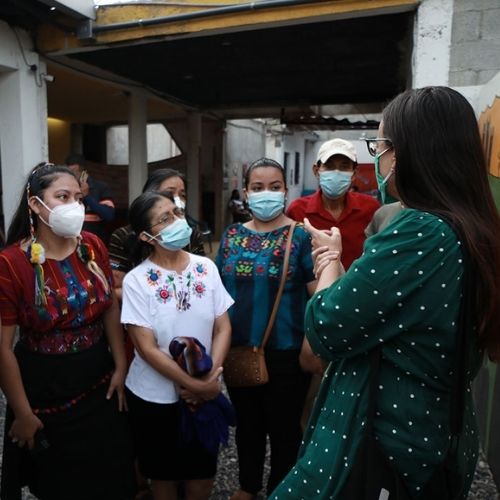 Description of the photo for people with visual disabilities: Group of young people talk with actors. (Credits: Ixcanul Foundation)

Economic Empowerment of Women in Mesoamerica Initiative: The Ixcanul Foundation is part of
a coalition that works with producer associations to support women’s economic participation
in sustainable agricultural production. In addition, it deals with the transfer of technical capacities to local partners that allow them to collect stories about their processes and promote that the narratives come from the women themselves.

An itinerant screen for the recent history of Central America: This project seeks to democratize access to high-quality multimedia content, including movies and other forms of audio and video in different regions of Guatemala, giving priority to communities with little access to quality content.

The Ixcanul Foundation has two new initiatives: Story of brave girls, which seeks to propose narratives on the development of resilience that will be transformed into a short film. Training and documentaries where we will seek to work hand in hand with rural populations. We are proud of the work of this organization!