Guatemalan actress María Mercedes Coroy will be part of the Marvel universe since he joined the cast of the next film of Black Panther: Wakanda Forever.

We tell you all the details about Coroy’s participation in one of the most successful Marvel sagas.

The trailer for the movie was recently released. Black Panther: Wakanda Forever in which María Mercedes Coroy plays the young version of Namor’s momcharacter that is from the Mexican Tenoch Huerta.

In the words of María Mercedes Coroy: «Being part of the Marvel universe for me is something very special, something that I did not expect. A very big step in my career and that opens a great door of opportunities to challenge myself as a person and professional, since it is a production different from the ones I have been in.

Description of the photo for people with visual disabilities: Character of María Mercedes Coroy during her gestation period. (Credits: Press Release).

The movie was directed by Ryan Cooglerwhom Mercedes described as a great director, who helped her and gave her confidence during the recordings, which took place in Los Angeles, Atlanta, and Puerto Rico.

According to the actress, this role was a great challenge that required new skills, as it is a fictional character that is part of a new universe, which was something totally different from her previous jobs.

Coroy commented on how difficult it was to shoot underwater: “The hardest part of the shoot was acting underwater and making the emotions look real, reflecting that you live underwater, without any bubbles coming out of your nose or mouth,” story.

The pride of belonging to a Marvel production

As “a sea of ​​​​emotions” Coroy expressed his feelings at the time of seeing himself in the trailer for the film: “I felt my heart throb so much with emotion and knowing that I am there where I did not imagine I was going to arrive, between actors and actresses I have admired since I was a child. My eyes filled with tears but also with deep gratitude for everything that is to come. 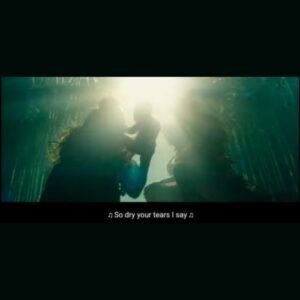 Description of the photo for people with visual disabilities: Moment in which the character of María Mercedes Coroy gives birth in the saga. (Credits: Press Release).

The premiere of Black Panther: Wakanda Forever is scheduled for November 2022. What pride that a Guatemalan is part of this great saga!