Home Anime Naruto, the origins of the teenage ninja, now in HD

The arrival of the anime Naruto to Spain was perhaps a little later than it should have been, when the manga boom was already fully established thanks to its publication by the late Glenat (is now comic planet who publishes it in our country).

It was from the hands of paniniunder the baton of The Licensing Machine who distributed in Spain the anime series that came to television: Jetix, Cuatro, Canal Panda, Animax, Boing,… with the first 52 episodes censored with a horrible American opening and ridiculously deleted scenes, like the accidental kiss between Naruto and Sasuke.

Still, that version is the one he edited panini in 12 volumes on DVD and then released 4 packs up to episode 104 (the other 52 almost uncensored now) as well as the rest of the series on TV due to fan complaints, but the DVD release was pretty disastrous for what was not concluded in that format.

The series was recovered in the original version subtitled in Spanish through Crunchyrollcurrently available alongside its sequel.

Select Vision recovered the original series in its entirety, the 220 episodes without any censorship, respecting the series as much as possible, and released it on DVD in packs and later on two compilations.

When the distributor announced the license for naruto shippudenits sequel that we will talk about later, was also accompanied by the news of the Blu-ray edition of the first series of the franchise, complete with the first volume and its containing box being on sale since last month of March, which is the one we are going to review in these lines.

Here begins the legend of Naruto, a young man willing to overcome all kinds of obstacles to fulfill his dream of becoming a ninja master. Welcome to the Hidden Leaf Village, home of the Ninja Academy. One of his most famous students is the young orphan Naruto, but not so much because of his skills as because of his pranks… and because of the dark secret he harbors inside. 12 years ago, the fourth Hokage Master sacrificed his life to seal the destructive Nine-Tailed Fox inside the body of the newborn Naruto. Determined to become the next Master Hokage, the highest distinction a ninja can attain, Naruto is assigned, along with Sakura and her rival Sasuke, to Team 7 led by Instructor Kakashi. His first serious mission is to escort the bridge builder Tazuna to the Land of Waves, which turns out to be more difficult than they anticipated… 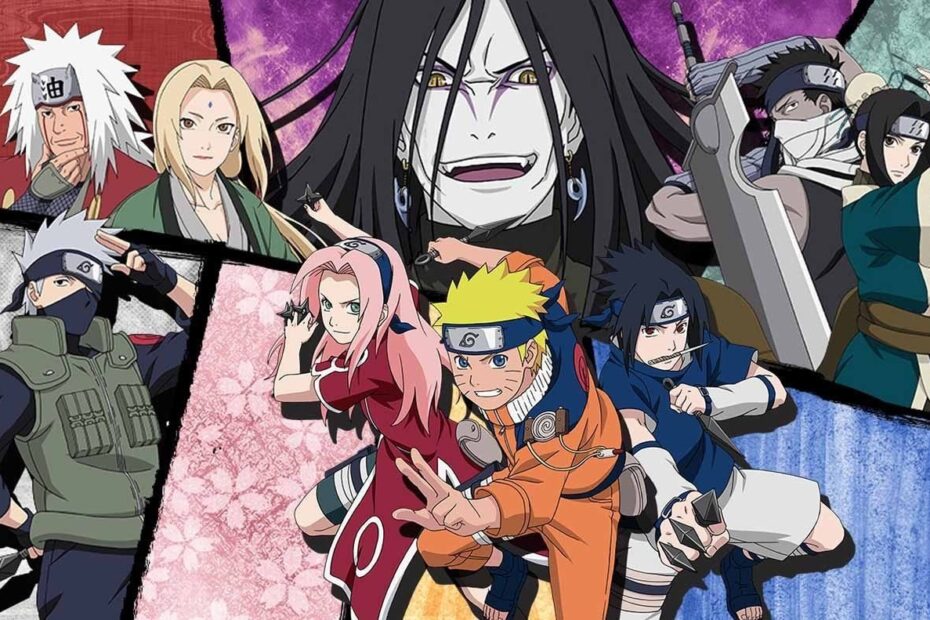 The story was a novelty in ninja manga, a quite entertaining story combining good characters and a fresh air in the shonen of the time that has made the series what it is to date.

Following in the footsteps of the manga, we also find the criticized filler that the most staunch always criticize, but it is there, it is part of the anime, and it is not exclusive to Narutoalso why settle for it, with better or worse successes, the “filler” episodes, which is how the chapters that do not adapt part of the manga and have original stories are known, sometimes they are good and have stories also very well elaborated.

The main story, aptly enough, follows Naruto and his friends’ individual growth, along with their development as a ninja. In addition, it focuses on the interactions between them and the influence of the environment on their personalities.

Then we have the different plot arcs or sagas in which the original base of the story is inserted and that allow its development throughout those 220 episodes that relate the pre-adolescent part of the characters.

Naruto it has a large number of characters that, for the most part, are distinguished by being ninjas. These cores successively become the basis for character interaction, where teams are chosen for missions based on their performance and complementary abilities. This, combined with the plots of each saga, make the viewer, although he sometimes falls into the well-known clichés in shonen of this type, enjoy an entertaining story with good developments at times.

It is true that there are moments of the action that become quite eternal and that in some chapters, the plot twists make them feel perhaps slow with some fights that are a bit endless, with fairly quick conclusions for what they gave of themselves, but sometimes that same snag is its essence. 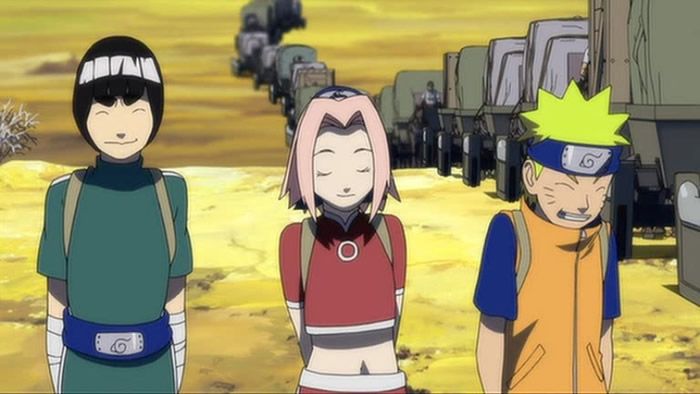 Its origin dates back to 1997 Masashi Kishimoto, when he was working on a one-chapter comic titled Narutofor the magazine Akamaru Jump, and despite the fact that the author’s original idea was to focus on another story, by the fortunes of fate he began his journey in its manga version, being his most important work with 72 volumes behind him, published in Spain by the hands of Comic Planet.

The October 3, 2002 the anime series premiered in Japan at the hands of Studio Pierrot and with Hayato Date as director of the series with a great team with logical variations in scripts and others given the longevity of only the first series.

The first 136 episodes were adapted from the first volumes of the manga, quite faithfully, although the violence was obviously reduced in some cases compared to the printed version and with minimal variations. Afterwards, the remaining 85 episodes are anime original stories.

After the good reception of the DVD edition, Select Vision The first series has been released on Blu-ray. Its first volume is already on sale and is accompanied by a chest to be able to place the 9 boxes that will contain the complete series of 220 episodes, which can be purchased at the usual points of sale, or subscribe through the website of the distributor with exclusive gifts. 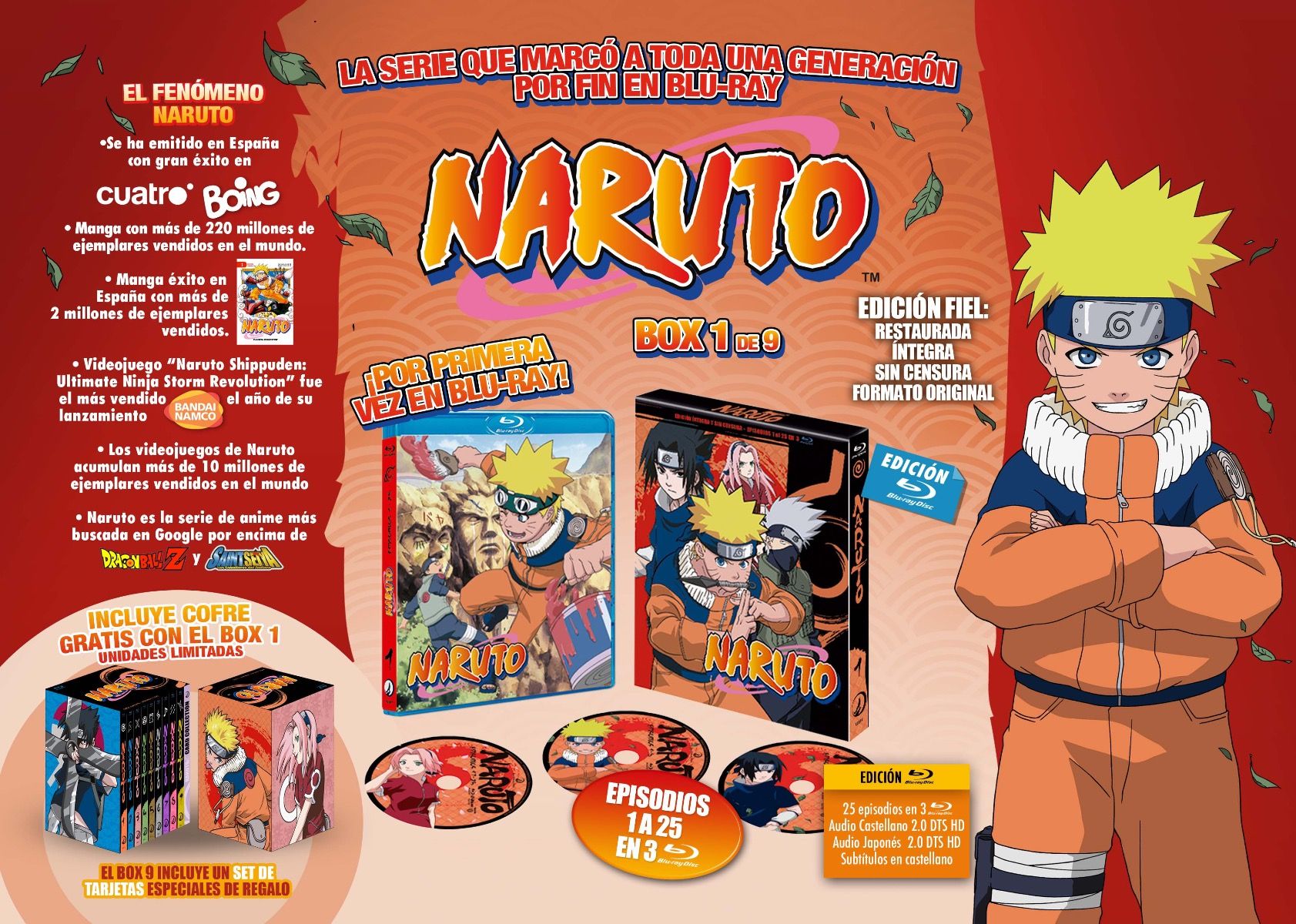 Select Vision edit the series in HD, restored edition and without any type of censorship (we will see the scenes that were cut on television).

The audio of the television broadcast has been recovered as it is fully dubbed. In DTS-HD 2.0 format for the Spanish version, as well as for the Japanese version, with the subtitles made from the Japanese version. We also have the uncensored edition, the original openings and endings.

In this case, the extras are practically none, but the number of episodes per box makes up for it.

Naruto It is already a classic, it has become one of those series as they can be dragon ball either Saint Seiyaalthough more current than them, of course, which has both a horde of followers and detractors, but for what the series itself means, it is worth finally having a careful HD edition in Spain.

It is true that currently it does not present great plot novelties and that at times it suffers from slowness and plot laziness, but it is worth enjoying it as it really deserves and in full, because despite whoever weighs the filler part, it also has its memorable chapters. and of quality.

A shonen that has marked a touch since its arrival to a very large group of fans (or not) and that we can finally enjoy on Blu-ray. The DVD edition of Selected (still available) was also very neat, and now we finally have the series in HD.