Since its original launch in 2018, NARUTO TO BORUTO: SHINOBI STRIKER has attracted more than 10 million players. The game, which has just entered its fourth active year, will continue to receive new content, both through a new season pass and through updates that will be released throughout the year, in order to continue improving the game.

Thanks to the fifth season pass, titled «LEGACY», 5 new shinobi masters are coming to the game throughout the year.

Starting in the summer, existing scenarios will receive new cosmetic changes and gameplaythus creating new combat possibilities that will be enhanced with the new characters available. The game will also add chakra jumping to the system, giving combat a new use of the vertical plane.

The new updates of the Hidden Leaf Village will allow to offer new atmosphereas will change the way players interact and use the village services. Several places will be updated in the spring, such as the tool shop or the ninjutsu library.

Finally, the team continues to listen to feedback from the community, and as a result, throughout the year various improvements will be added to the game and character balance will be adjusted. 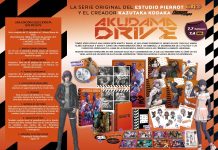 This is the Akudama Drive editions, on sale on May 25