The Ciudad Universitaria team beat Pumas Acatlán 53-7, adding its seventh win in a row this year and will now host the UANL Authentic Tigers in a duel for the championship.

Pumas CU entered its name in the final for the championship of the Intermediate category of the National Student Organization of American Football with a resounding 53-7 victory over Pumas Acatlán in one of the semifinals of the contest.

The auriazules of Ciudad Universitaria continue with a perfect step this season by adding their seventh victory in a row in the year, which also gives them the pass to the duel for the title against the Authentic Tigers of the Autonomous University of Nuevo León , which they will play at home.

The Roberto “Tapatío” Méndez Stadium in Ciudad Universitaria was the setting in which the CU Pumas dominated the actions against their institutional brothers from start to finish. Juan José Vega Velázquez (jersey number 15), runner for the Pedregal cats, opened the scoring in the first quarter with a run down the middle that made it 7-0 with an extra good point by Juan Pablo Alquicira Aguirre (84 ).

Later, the locals increased the lead with a long 70-yard pass from quarterback Ludwig Zaragoza Ruvalcaba (16) to wide receiver Jadhiel Alejandro Ponce Hernández (33) for his second touchdown, which with the extra good of Alquicira Aguirre (84), put the cards 14-0. 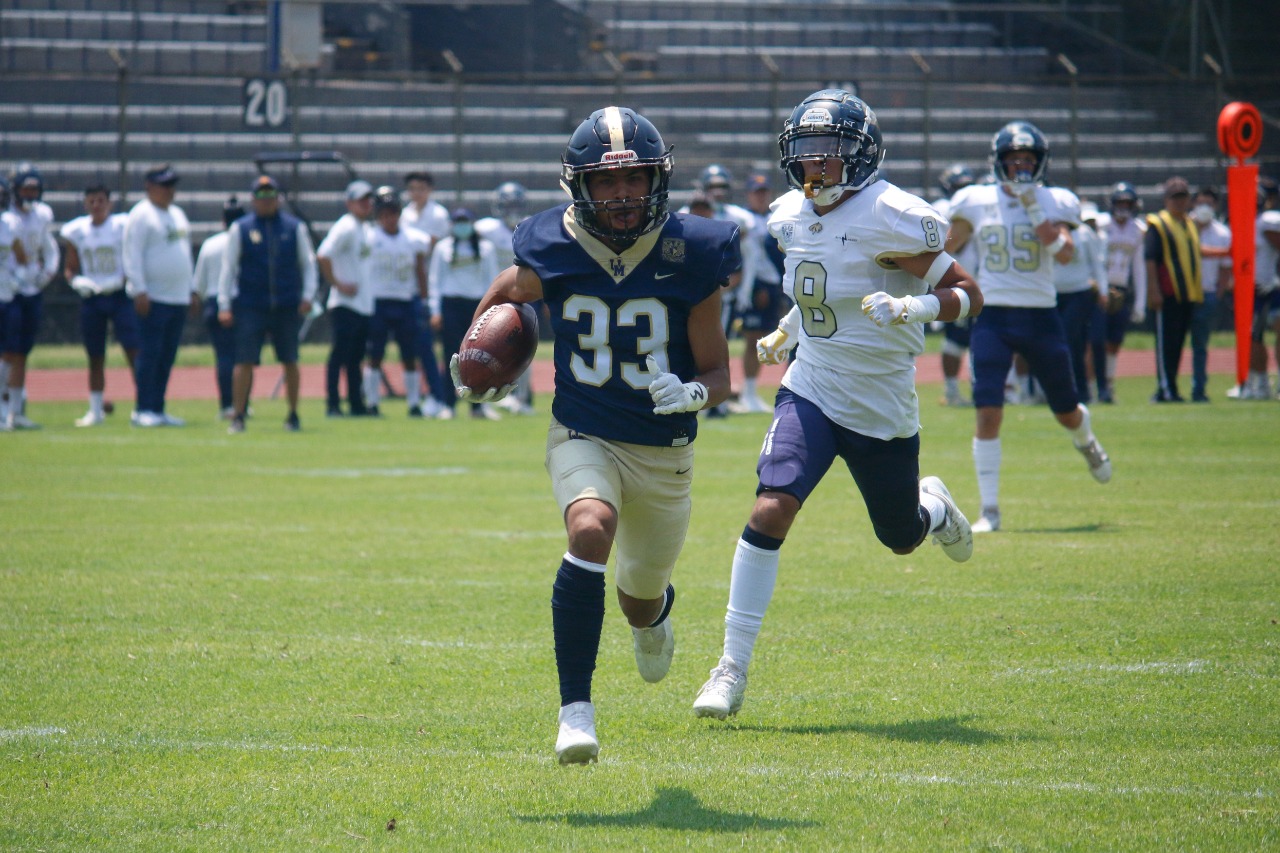 For the second quarter there was one more emotional injection for Pumas CU, with the interception by defensive back Braulio Antonio Iturbe Muriedas (29), which led the home cats to another touchdown, with another carry by Vega Velázquez (15 ) and an extra point from Juan Pablo Alquicira (84) for 21-0. However, before the break he discounted the Acatlán box with a touchdown pass and extra good to send things 21-7 at the break.

Already for the second half of the game, field marshal Ian López Cabrera (18) took control, and the university attack immediately manifested itself again with another score by Juan José Vega (15), although the extra point was missed by Alquicira Aguirre (84) and the scoreboard was 27-7. With the visitors’ urgency to score points and shorten distances, the Pedregal team’s defense once again made an appearance by recovering a loose ball, now thanks to the work of linebacker Víctor Antonio Pérez Rivera (13).

Puma dominance was confirmed with one more score, again through Alejandro Ponce (33), who received a pass from Ian López Cabrera (18) and hit the end zone to make it 34-7 with the extra good shot from Alquicira Aguirre (84). ). In another touchdown pass, quarterback López Cabrera (18) connected with wide receiver Raúl Rodrigo Blanco Ruiz (9), plus the extra of Juan Pablo Alquicira (84), making it 41-7. For the last quarter, the Pumas CU defense still recovered one more ball with linebacker Samuel Adael Sandoval Calzada (38). With the game practically resolved, two more touchdowns fell, the first by land with a carry by running back Eliu Otoniel Martínez Preciado (30) that made it 47-7, and the second with a pass by field marshal Ian López (18 ) to wide receiver Alan Jahir Jacob Montiel (11), to make the final score 53-7, since in both cases the extra point was missed by Alquicira Aguirre (84).

“It’s a great achievement, the key to winning was the rhythm of the offense, having a very good defense and not losing focus. We are going to fight for the trophy that belongs to us”, said Alejandro Ponce (33) after the game.

“We made important adjustments compared to previous games, the interception was stamina for the team, it ended in seven points in favor, we were superior to them and now we are going to work hard for the final, we are going to do what we know how to do and we are going to be champions”, added defensive back Braulio Iturbe (29). 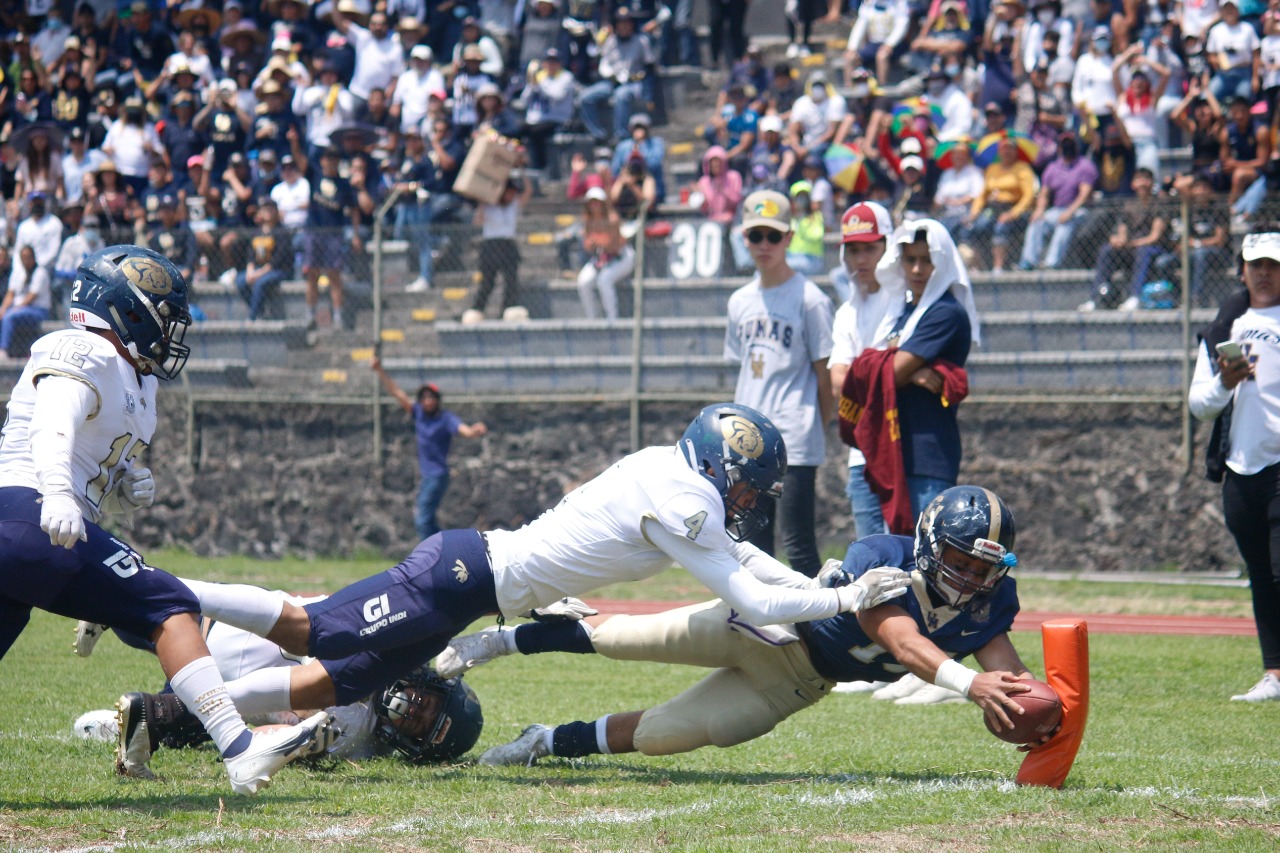 For his part, the auriazul runner Juan José Vega (15) considered: “We feel satisfied. Personally, I’ve been preparing for this for a long time, and to achieve it is very satisfying. The support in the stands is greatly appreciated.”

The grand final for the ONEFA Intermediate category championship, in this year’s 2022 season, will be held next Saturday, May 7 at noon on the same stage, the Roberto “Tapatío” Méndez Stadium.