The theatrical adaptation that represents the first part of the sacred book of the Mayans, the Popol Vuhwas recently presented at the Almagro International Classical Festival which takes place in Spain.

It is the first time in history that Guatemala is present at said festival. That pride!

The play produced by scene was presented at the 45th edition of this international festivalwhich has been held since 1979 in the town of Almagro in Spain.

Description of the photo for visually impaired people: Theatrical presentation of the Popol Vuh at the Almagro Festival. (Credits: Pablo Iriarte).

After months of preparation, the play that focuses on the story of the brothers Hunahpu and Ixbalamquewas presented last Saturday, July 23 at the Plaza Mayor of Almagroand was part of the international works that were presented during this Spanish festival.

More about the work of the Popol Vuh

The play was produced by Samantha Garzaadapted by Mariano Menchu and had the address of Juan Antonio Llanes.

According to Juan Pablo Asturias, one of the producers, the work explains the history of the creation of the world and how The Ingenrators changed their state after reflecting and experimenting, managing to create the perfect man from corn. 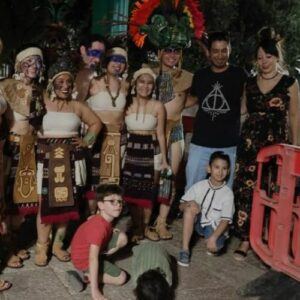 Description of the photo for people with visual disabilities: Public taking photos with actors from the play Popol Vuh (Credits: Pablo Iriarte).

It also narrates how a pair of brothers seek to avenge the death of their father by traveling to Xibalbá and confronting the dark lords that live there.

It is a theater production company and acting academy that seeks to promote art in the country and create an impact to generate new generations in Guatemala. Currently they have made more than 40 theater productions of all genres. 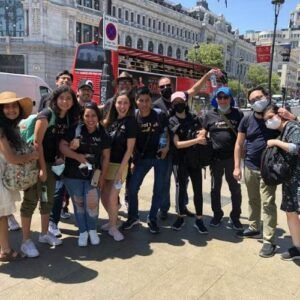 Description of the photo for people with visual disabilities: Actors from Escenarte upon their arrival in Spain. (Credits: Pablo Iriarte).

We are proud of these chapines who raised the name of Guatemala in Spain! #PrideGT