MadCool has closed its doors until next year. With the latter, the festival not only reached its fifth edition, but also reopened its doors after the pandemic. The two canceled editions (2020 and 2021) came to have a poster, but not with the approval of the virus. And it is clear that the festival caught people with desire, because according to the latest data from the organization, up to 305,000 people have passed through the Valdebebas venue these days.

If the festival has continued with its strategy of having a varied lineup with proposals for all tastes, the first night, Wednesday, was undoubtedly Metallica’s. With an average age of close to 60 years, James Hetfield’s band played a concert that lasted almost two hours. Metalheads were the largest group on Wednesday, perfectly recognizable by their black t-shirt outfits and older on each leg than many of those who took to the stage to perform.

On Thursday it was the Americans-with-British-sound The Killers who brought about the climax of the night. Shortly after announcing that the next day they were going to Bilbao (they were performing at the BBK), Brandon Flowers sang their well-known Mr. Brightside and drove the audience crazy with a song that is more than 20 years old, but that retains the ability to move to everyone who listens to it. 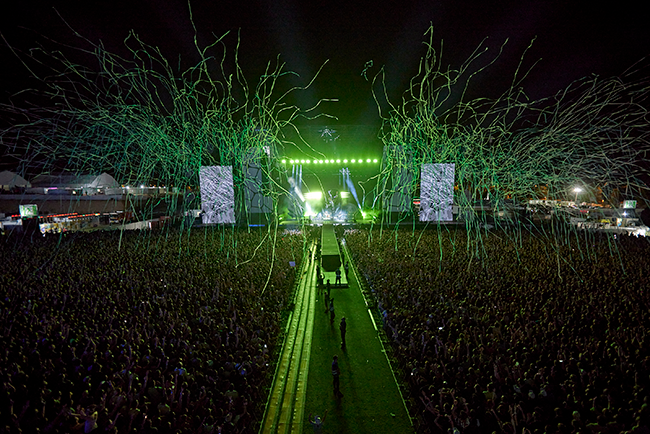 Friday was probably the day with the most eclectic lineup. Going from the renewed pop jazz to the dystopian western of Muse’s Knights of Cydonia, passing through the (very hard) Incubus, seemed like a risky proposal. Despite this, Muse imposed their experience and ended up offering a quasi-circus performance that shows that experience is a degree and that they have more trampled stages than anyone else.

On Sunday it seemed that someone had turned the handle of the tap through which people leave. The unconditional fans of the festival and an audience highly motivated by the concerts by Nathy Peluso and Two Door Cinema Club remained. The Argentine, who arrived on Sunday as the headliner, spoke about how the Spanish capital feels like her own and made the public give it their all with a world music star show.

As a partner of the festival, Royal Bliss once again slipped in between the hard riffs of Metálica, the bachata rhythms of Peluso and the electronic sounds of Mura Masa. With stands in the VIP area and in The Club, the Royal Bliss bartenders were in charge of quenching the thirst of the staff during a festival in which the heat was quite intense. The Royal Bliss mixers brought a well-deserved rest to the tortured (and dry) throats of those who passed through the premium areas of the Valdebebas venue. Everything, at the hands of the professional mixologists that the brand sent to serve the festivalgoers.

With the lock on the doors of MadCool and summer already installed, it’s time to recount the experiences of this first post-pandemic festival. The truth is that the heat from the Valdebebas asphalt was hardly suffered in the MadCool Space and surely that means something. The most important thing is that we can once again enjoy nights of music and bathing crowds, and in that sense, the festival delivered what it promised. Let’s hope that after the two-year hiatus that we have eaten, things continue and we can go to Villaverde next year. Or to Valdebebas. Or wherever it is needed. Because there is already desire.