We are in the art week, it is difficult for you to choose between so many artistic events: Arco, Hybrid Art Fair, exhibitions galore… You really like contemporary art but you feel totally adrift when you read a poster in a museum or you immerse yourself in the reading a specialized publication… Does the language of artists really have to be so convoluted?

While the older ones rebel because certain designs are complicated for them (which is not a problem of the person but of the design, originally poorly conceived). They are very current, but this lack of understanding does not only happen with the use of ATMs and smartphones. Try if not to read a salmon supplement (those of the economic newspapers) and confess, do you find out something? Most likely, the investment funds page will make you sleepy, let’s be honest…

The use of cryptic, pompous and convoluted language in certain sectors is widespread and, of course, it also happens in art, a very current topic this week in which several artistic events take place. Because, how many times have you gone to a museum, have you read the poster of the painting in question and have you stayed as you were, that is, with a poker face? We are not just referring to the fact that the name of the work seems to you to have absolutely nothing to do with what you have in front of you, but rather that the artistic argument could be said to be written in Aramaic, right?

How many times have you gone to a museum, read the poster of the painting in question and stayed as you were, that is, with a poker face?

If you think we are exaggerating, here is an example taken at random from an exhibition: «The works for sale will have the appearance of a «sandwich» in which there will be two layers of glass (one reinforced background and one transparent front) and different layers of objects will take place inside it, which will make up three different types of works (hotel objects, bodies and reflective elements such as the glass itself)». Is it clear to you what you take home if you buy that work?

One more example: «However, the artist generates his own stamp, recognizable and different from the previous ones, very much framed in postmodernist iconography, centered in its beginnings on the female figure and with the aim of achieving beauty and aesthetics in decomposition of its forms, more recently more interested in series that work on the concept of the crowd, which despite this maintains order». Help, help… someone help us.

Not knowing is almost not the worst but feeling as if you suffer from a lack of reading comprehension. But, where does this mania of contemporary artists to use an encrypted language that seems to be only available to a few come from? Is it really not possible to tell things in another way that is more accessible to all?

This language was baptized as International Art English, IAE, the artist David Levin and the sociologist Alix Rule. They collected texts from exhibitions broadcast on the e-flux platform (a network for art professionals) since 1999, and analyzed them with a linguistic analysis program.

They published the results of their investigations in 2012, in the pages of Triple Canopy magazine, creating a stir as they concluded that art texts abused excessive, incomprehensible and empty language. We are already understanding why we do not understand anything in our walk through certain museums…

“Much writing on contemporary art is hardly understandable,” wrote the reviewer. Gilda-Williams in his work How to write about contemporary art, and listed some of the tics of these texts: proliferation of suffixes (post, pre, proto, hyper), abuse of certain words (transversal, space, device, platform) or forced nouns , many finishes in ity: spatiality, performativity… 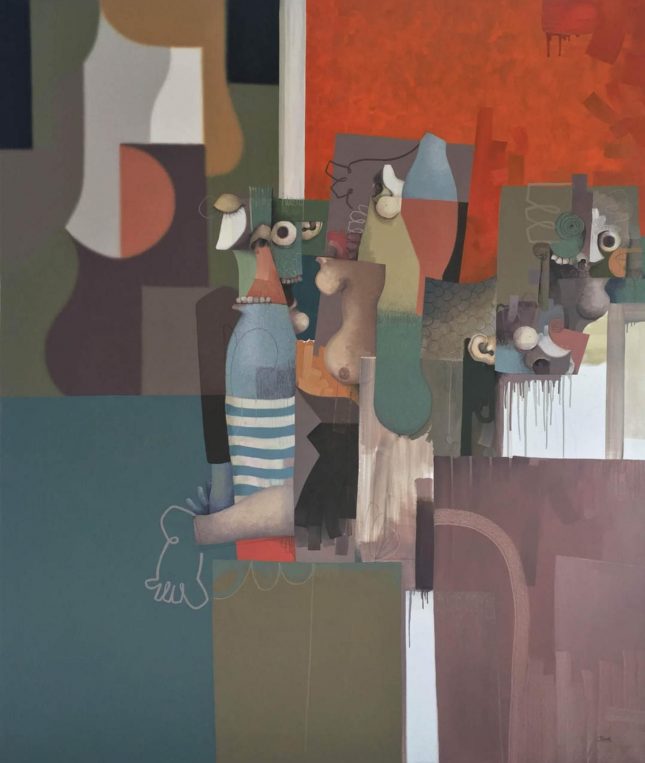 “The language used in the art world has always been collector-oriented. We are talking about a very elitist sector, very closed and very little evolved and that is why our platform aims to democratize this, which previously had very restricted access, only for a few”, explains Pablo García, advisor to Saisho, a Spanish investment and training platform. in contemporary art.

And it is that if you make it very convoluted you continue to perpetuate the image that it is only for a few, the chosen ones. The philosopher already said Ernest Castro with your text Your cartouches make me feel stupid: «Misunderstanding generates an aura of imitation and reverence around him».

The origin of everything

It seems that the origin of this encrypted writing is in October magazine, an American art publication founded in 1976 by Rosalind E. Krauss, a pioneer in the use of the French Theory (this is how the influence exerted by Derrida or Foucault in American intellectuals) in this discipline.

If one dedicates himself to diving into artistic texts, he will find a series of words that are used a lot, sometimes put a bit like we put salt on steaks, randomly: visibility, experientially, potentially, space, concept, reinterprets, relocates, decomposes, underlies... are just some of the most repeated. Prepositions and prefixes are also often abused: proto, post, hyper, sub, trans…

Also, often you want to give a lot of information in very few lines and this creates even more confusion for the reader:

«Artist who works and reinterprets the decomposition of the human figure of George Condo mixing it with a lot of avant-garde heritage: Picasso on the cubist side with the relocation of parts of the figuration that should not be there and Dalí on the surrealist side, with the theme that underlies before figuration and above all the tones, widely used in this style, specifically maroon and dark orange to attack skies or backgrounds”, is one of the arguments of Carlos Blanco Artero, an artist who will be present at the next Venice Biennale. 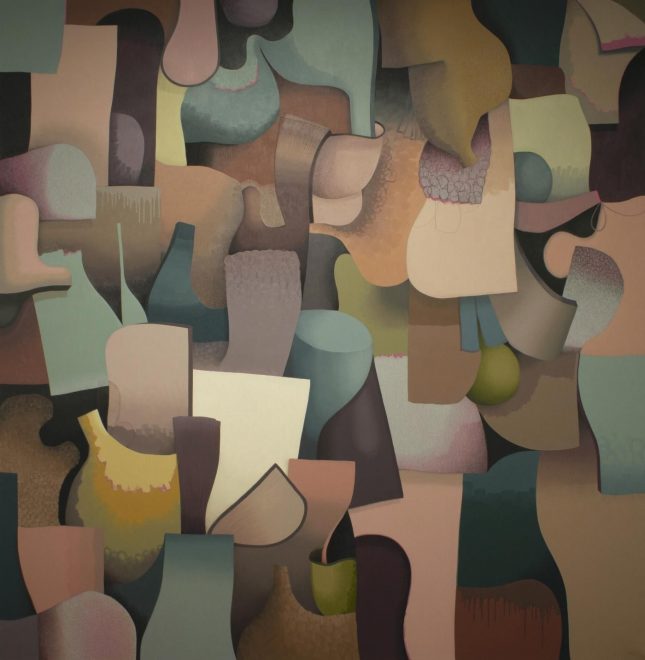 “If we analyze, we obtain several pieces of information. The word reinterpret, for example, practically all artists framed in postmodernism, reinterpret, that is, use styles from the past and present them with a new approach, without hiding the reference of the work with that style. Regarding the word decomposition, it refers to the geometric decomposition of the human figure, where we see an arm, a cylindrical object is presented as a representation”, explains Pablo García. “George Condo is an artist greatly influenced by Basquiat, characterized by works in which he dismantles and reassembles reality, mainly human figures, to show us scenes of everyday life,” he adds.

Let’s see more examples told in an accessible way, in this case we turn to the artists Aggtelek and their Second Hand series:

“This series remakes, reexamines, alters and appropriates ideas and works of modern and contemporary art in an irreverent, artful and domestic way. Through the idea of ​​“second hand” a complex knowledge of the history of art and the artistic world is built and formed from a subjectivity altered by time, taken to a territory of domestic narratives, comic gestures and demystified great ideas. The planet series current themes from a simple and everyday humor, such as the change of personality, the alteration of ideas, the expansion of images in other media and content; and the loss of authenticity and the questioning of the original in an increasingly digital world». 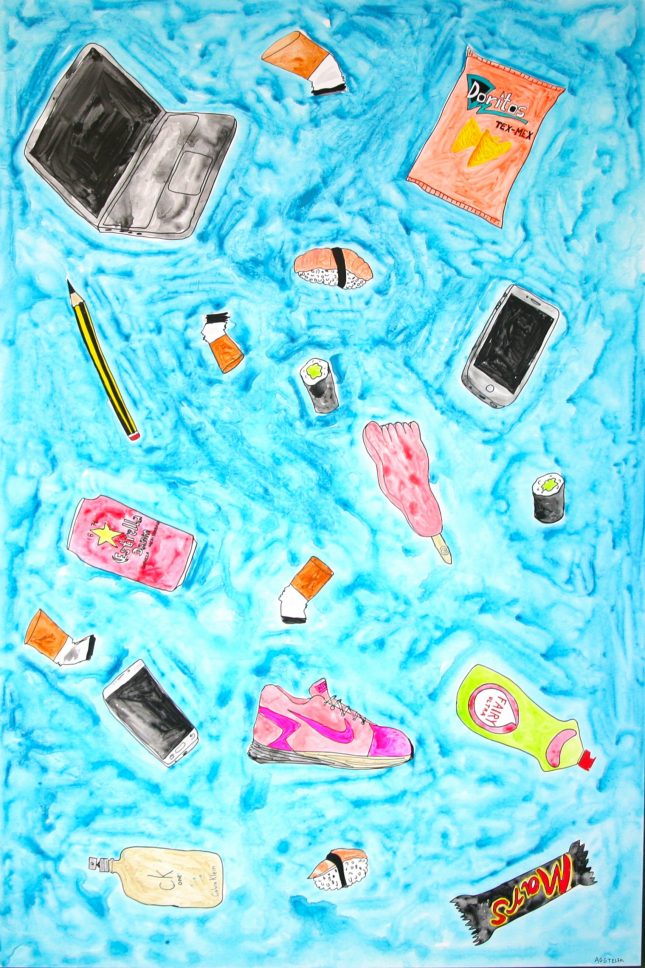 What do these creators want to tell us? «His work is based on the reuse of artistic ideas, such as Pop Art, Superflat or Simulationism, already presented previously, hence the name Second Hand. They present them from a new and very ironic point of view, with a common theme: an increasingly digital world and with an underlying question, do we think it is good or bad where we are going? », clarifies García.

Right or wrong, we claim a future in which art, and other disciplines, are less arid and confusing. Hence we turn to Bukowski’s quote that perfectly sums up this position:

An intellectual says a simple thing in a hard way. An artist says a hard thing in a simple way.