Yuri, the sololateca girl who speaks 8 languages went viral in june 2022 on social networks, through the video posted on TikTok.

Recently, the singer Josy Esteban Chigua and his partner Deanna Melillo shared the video of a Sololateca girl who is able to speak 8 languages. What a chili!

Both tiktokers highlighted the great talent that has Yuri to communicate with visiting tourists panajachel, Solola, in 8 languages, including 2 languages Mayan origin.

In the video, published on this social network, it is observed how the girl is able to greet in the following languages:

Description of the photo for people with visual disabilities: Tourists with children from Sololá. (Credits: Screenshot / @josyestebanchigua ).

During the video, the little girl relates that together with her cousins ​​Juan, Noé and Luca, they have managed to get along in these languages ​​thanks to the fact that they have listened and paid attention to visitors from other countries while they communicate.

They also highlighted that it is the tourists themselves who have shared their teachings with them so that they can perfect their way of communicating. 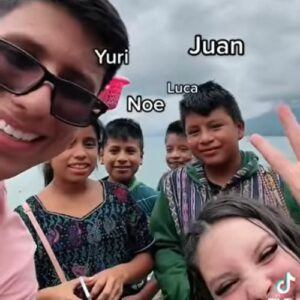 Description of the photo for people with visual disabilities: Sololateco children with tourists. (Credits: Screenshot / @josyestebanchigua ).

The video published on the Tik Tok platform has accumulated more than a million views and more than 138 thousand “likes”.

In the comments on the post, netizens highlighted Yuri’s talent, intelligence, and ability, and complimented her on her skill and young age.

We share this video so that you can also be surprised by the talent in Guatemala. #PrideGT